After viewing the blog, Holly suggested you might be interested in what she does to stay healthy every day. So here it is:

She's found the Hypertonic Saline (HS) to be very helpful. After six months of using it, her lung function, which had gradually declined over several years, improved 30 percent! Her coughing had gotten bad enough that she coughed or cleared her throat almost constantly. The HS has relieved that, allowing her to get better rest at night.

For information on how the Reliv supplements have made a difference, visit her Web site at: www.geocities.com/MurrensNatureMama, and click on her Reliv Story. To summarize, I'll tell you that improving her nutrition has drastically reduced her need for hospitalizations.

Holly has a port on her right side, under her arm. This is her third, the first two being removed when she experienced two different bouts of blood infections. She prefers it under her arm, because it doesn't show when she wears sundresses or swimsuits. It's also easy when she's "hooked up" to just let the tube come out from under her shirt, so it's more comfortable and not in the way.

If you have any questions about Holly's routine or why she does things the way she does, please ask, and I'll get the questions to her. You know, if you're wondering, someone else probably is too.
Posted by Caren at 3:07 PM No comments: 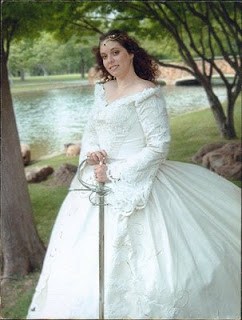 Meet Vanessa Elizabeth Dawn Loften, named after her grandmother Elizabeth (Betty) Freeman, who has been quite influential on both girls, and after our friend Don Pfendner, who was crucial in our decision to have another child. Vanessa is, at 26, nearly four years younger than Holly. When we chose, after Don's wise counsel, to have another child despite the doctors' advice, we decided that this child would be our last. If she did not have CF, we would celebrate and consider our family complete. If she did have CF, we knew we did not have the resources financially, physically, mentally or emotionally to deal with any more who might have the disease. So two would be our limit barring supernatural intervention, and after Vanessa was born, I felt complete. I did not long, as I had before, for more children. I felt blessed, as I still do, by my two precious daughters.

Vanessa and Holly are nearly as different as night and day. However, in the ways that are most important, they are very much alike. Vanessa is, like her sister, very creative and extremely intelligent. I felt constantly challenged by them. I still do. I'm learning from them all the time. The best part about being their mother is that they are women I would want to know, even if they weren't my daughters. As mothers, they constantly amaze me. They know how to love their own daughters in the way they need to be loved. They are doing what I strove to do, but better, and I admire them deeply.

Elizabeth means "encourager," and Vanessa has always lived up to that. When she was small, Holly made her a sweatshirt with a cheerleader on the front that she cherished and wore until it didn't cover the essentials anymore. Vanessa continues to encourage, as she has through Holly's most recent challenges, flying from Texas to Alabama to visit Holly as soon as it was practical. Her influence was dramatic. Holly began to improve noticeably while Vanessa was there, pushing herself to do more and more.

As sisters who live far from one another and have very different personalities and, sometimes, very different views, they work hard to stay close. They both are happy to be sisters, and when it counts, they're there for one another.

Examples: Holly gave birth to her daughter, Murren, at home. Crazy as it might sound, it's really not. Check out Holly's blog, www.geocities.com/MurrensNatureMama, to learn more. So when Vanessa got pregnant, she and her husband started planning a home birth. (Brian wasn't sure at first, especially since he works in the medical field, but after he learned all the facts, he became convinced.) During Vanessa's especially difficult labor, Holly was our long-distance support. We learned later that, as encouraging and confident as Holly was over the phone, as soon as she'd hang up, she'd be on the phone with a friend, frantic, and questioning if everything was really going OK.

And when I called Vanessa to give her the news of Holly's most recent crisis, I didn't have the foresight to make sure Brian was with her. As the shock hit her, Vanessa became very distraught at this unforeseen threat to her sister. I stayed on the phone with her for a long time, talking her through it until she was calmer. She told me then that as soon as possible, she would be on a plane to Holly. She just had to see her for herself to know that Holly would be OK.

They are, as I've said before, special gifts to me. They are also precious to one another. Thank God for Holly and Vanessa.
Posted by Caren at 3:50 PM No comments:

Forgive me for taking so long to post again. I had a particular photo of Vanessa that I wanted to use for my introduction of her. However, due to my recent move, I can't find it!

At any rate, I realized that in my introduction to Holly, I failed to tell you about her blog. It's for anyone with CF, especially those hoping to become parents either biologically or through adoption. She put in hours of research to offer complete and accurate information. It's probably the only place you'll find it all put together so clearly and concisely. I recommend that you check it out at: www.geocities.com/MurrensNatureMama.
Posted by Caren at 3:17 PM No comments:

Caren
On Mother's Day in 1979, I became a mother with the birth of Holly Catheryn. Seven months later, she was diagnosed with cystic fibrosis, and I felt like my world had fallen apart. Then we were warned by doctors not to have more children. However, after meeting a remarkable young man -- Don Pfendner -- we made what some considered an unwise choice -- to have another child. Don had CF and told us how much he loved life, in spite of CF. Don died in the summer of 1982, the day before I called to tell him that I was pregnant again. On January 23, 1983, Vanessa Elizabeth Dawn (in honor of Don) was born into our lives and has brought us joy ever since. Now, nearly 30 years since Holly's birth and with lots of ups and downs, fears and cheers in between, we're about to celebrate another birthday and Mother's Day. Occasionally now, she orders me (with just a hint of a grin) to treat her right, because, after all, she and her sister will be choosing my nursing home. I respond that I plan to live to be 100, then I tell her that I expect her to hold up her end of the bargain.